Why I don’t care about open rates 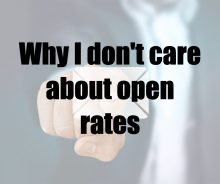 “You have to track open rates as a key metric, because…”

One of the copywriters that I learn from recently told the story about his sales page.

How it kept showing up all over, and he would just chuckle.

Not because it didn’t work, because it actually did pretty good to collect initial contact information.

However, what he found out was that he was making virtually ZERO sales from that page.  Nothing.  Nada.

But have you noticed how much copying, or ahem, swiping occurs?

Well, at the most simple level…swipers assume that what they’re copying actually works.

Or, they assume they understand how a business is structured based upon the external things (pages, websites, Facebook ads, email) that they see.

But the strategy and most importantly the results are completely hidden…

Often, this occurs with people who are mimicking gu-roos.  They think because they have a ‘big reputation’ that what they are doing MUST be working…

But a swiper can’t translate position, reputation, personality, or connection with their audience.

All that time and energy put into ‘swiping’, yet the actual dollars won’t follow.

Well, that’s the problem with open rates too.

It’s a bit of a vanity metric, and there are some systems that won’t record the open so there’s that too…

I’m not saying to completely ignore them, but for pete’s sake don’t obsess.

The goal is to book intros and make sales…so let’s not get confused.

It’s also one of the key benefits of working my system.

Because, in everything I do and teach (like this email) it’s about building a connection.

I welcome comments (and even stir the pot too) because it gets you in line with people you want to work with.

After all, there’s going to be another one tomorrow J

It’s not a magic pill, but it works.

So, if sales is your goal…