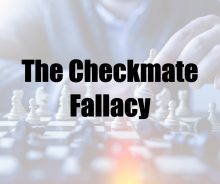 “Avoid the crowd. Do your own thinking independently. Be the chess player, not the chess piece.” – Ralph Charell

“Dad, can you come and play Chess with me?”

I actually enjoy playing Chess, but I’m not very good at it.

In fact, I’d say that I pretty much suck at it.

However, when you’re playing an 8 and 10 year old, you become the next coming of Bobby Fisher.

(They’ll be whuppin’ me soon enough…)

I’ve talked with a number of players that are very good at competitive chess, and a surprising theme emerged.

Especially when they first began winning against better players.​​

They had to be very consistent in their first few moves, in what’s called the opening.

It builds a consistent pattern end helps reduce the true number of “strategies” used.  Simply, it gives them the best opportunity to win the match.

Does this relate to increasing leads (and sales) for your program?

You betcha’.  Because these 3 steps are ‘the opening’ for every biz:

This is the opening that every successful program must follow.

SO, which step is the least understood and most often neglected?

Did you say, “What is audience building”?

If so, you’ve come to the exact same conclusion as every Chess Grandmaster in history.

It’s the “if you build it they will come” belief (and it’s an easy trap to fall into).

The belief that you can get to checkmate (more sales), without a consistent opening (building your audience).

The beauty about both chess and building your biz is that the more you work the opening, the easier it gets…

Right now, I’m looking for a couple of folks who want to work that opening.

It’s a done-for-you campaign to get people to raise their hands for your program.

But, I can only take a couple of clients at a time…

Previous Post Scratching the brain itch of ‘beautiful tactics’ Next Post A smuggler, a tax collector, and a printer walk into a bar…