Success Secrets of a Hollywood ‘Unicorn’ 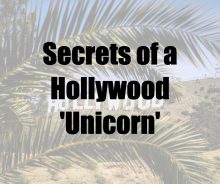 I’ve always enjoyed movies, although I don’t get to watch them very often.

I love the story telling, and how they work the emotional bridge that pulls people on the journey.

Let’s look at The Greatest Showman (which I’ve been referencing over the last couple of days).

Over a year ago, I stumbled across a video on YouTube that now has more than 46 Million Views, and I threw a note in my ‘subject file’ to come back to it..

So, what do we take from this now ‘famous movie’, and apply it to our smallish world?

So, why the breakdown of a Hollywood musical…

(For one, I’m always curious about how people succeed, and the stories behind them).

But, I see so many people in the position of Michael Gracey.

They have vision of what they want to accomplish, but they struggle to get that breakthrough.  They have the skills but the gap between them and their market needs to be bridged…

So, let’s simplify this:

That leads to that all important virality that accelerates your growth…and of course your sales.

We can all apply that…

Brandon “The Path Is Clear” Pugsley

Previous Post Am I ‘a freak’? Next Post The most important part of your email to get more opens