“Our silence is deafening and deadly” 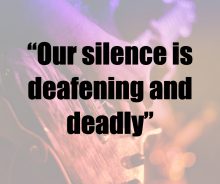 “Money won’t change you, but time will take you out”

Both of those quotes are from The Godfather Of Soul, James Brown.

I saw that was still playing gigs all the way in his 60’s!

He never slowed down…

His band, the JB’s, are famous for their precision and timing to keep up with the Godfather.

But, did you know that he used to fine his band members?

The Godfather was notorious for his tempo, changing, key, and songs during a gig.

(His music moved, and wasn’t the McPop that’s out there today…)

He worked with his band tirelessly, and developed a series of hand signals to tell them what to do.

They HAD TO keep up, or everything broke down…

Miss a signal, and he’d let you know about it.

In fact, you can go back and watch old videos of the Godfather and see this in action.

Just watch.  At a point in the performance, The Godfather will turn (ever so slightly) towards a band member and hold up his hand…

…Once he rubbed his fingers together (in that universal “money” signal)…too late.

He was letting the member know that they’d just been fined, and to get their sh*t together…

And he became known as one of the greatest performers of all time because of this ability.

OR, playing at the local pub on a weekend.

Precision and timing…critical factors to success with your biz’nass too.

But, do you know where and when to drop a beat, and bring in more sales?

Grab a slot on my calendar, and I’ll perform a Marketing Audit to help you discover any hidden marketing assets in your business…based upon what you already have…

…and I’ll brainstorm with you on how to get turn them into profits.

If I don’t show you a new strategy to increase your profits during our call I’ll send you $100 for wasting your time!

(No pushy sales, no fancy ninja automation…just performance based baby!)