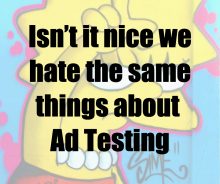 Have you ever watched the Simpsons?

The ever present Bart.

But, the center of the story is always Homer.

Because the story’s core really revolves around…the family.  (And they tested)

Even though the stories went in all kinds of crazy directions.

And they kept bringing in new characters, and giving more options to expand the Simpson’s universe.

They always came back and built around their core story and message. (And they tested)

The really interesting thing is, it didn’t start that way.

The show evolved.  It changed.

And…they tested it all.

It kind of started out slapstick.  Got a little crazy.  Tried to come off the rails, but they figured out what worked with their audience.

And they’ve always stayed true to the core message (and emotion) that made it successful.

And BTW, that love-hate relationship is perfectly normal J

But maybe you’re like the early seasons (having fun and trying to figure out what sticks).

Or the later seasons (you know what works and have to bring in new stories to keep your customers engaged).

No matter where you are…it means that your ads, creative, and message need to evolve.

But, here’s the kicker…

Do you know how to evolve your ads in a way that keeps you pushing the envelope?

And how to keep your brand centered and in alignment, like Homer.

There’s always a push-pull between your creative…and your system.

If you get one out of whack, “go with your gut”, or misread just a couple key metrics…

So, do you have a testing system like the one the Simpsons use?

Something that allows you to try different stories and angles..

…and tells you when to return to your core message?

Well, we’ve documented a proven ad testing system to help you “not hate” testing on Facebook.

So you can create, see if it connects with your audience…and then create some more.

Hook, creative, and even scale…at your fingertips.

Grab your skateboard, and head on over.