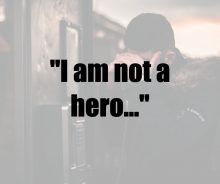 “…I’m a drifter with nothing to lose…”

In the movie Jack Reacher, the first one, where a former Army sniper was framed for killing 5 civilians by an ‘evil’ company for profit.

There’s a scene where the bad guy kidnapped the lawyer, Helen, and he was calling her to catch up.

Well, the whole setup is that Reacher has to do exactly what they say…or they’ll kill Helen (the lawyer).

Well, it doesn’t go according to plan (I’ve shortened this just a little…)

Reacher tells the thug, “Well I can do ya one better.  I have your picture, prints, and I’m going to the Feds.  The lawyer is all yours.”

Then he slams the phone down.  A little…um…animated banter happens.  And Reacher makes one last call:

“Do you think I’m a hero?  I am not a hero!  I’m a drifter with nothing to lose.  Now, you killed that girl to put me in a frame….this is how it’s going to work.  I’ll be along when I’m damn good and ready.  And if I even think you hurt her, I’ll disappear.  And that should make you nervous…because I’m in your blind spot. And I have nothing better to do.”

Obviously the guy had no choice but to tell Reacher the address.

Because Reacher gave ‘the bad man’ a Vision of what would happen if he didn’t.

Vision is a massive driver of change.  An absolute master of persuasion.

It’s one of the ways that enables your prospects to willingly, quickly, and eagerly move towards you and your program…without hard selling, closing, of those (frankly) stupid closing “secrets” you see in ads.

That’s just not necessary when you do it the right way.

So, how do you deliver vision to your prospects?  How do you keep them engaged and let their minds do all the work for you?

The nitty-gritty subject of this month’s Daily Lead.