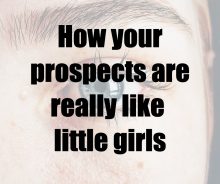 I have one daughter (and three sons) and of course I’m wrapped around her finger…or at least that’s what I’m told.

Anyway, Macy’s been hitting this little stubborn phase.  Not really with me, but definitely with my wife.

“Go pick up the toys in the back room”.

Anyway, her and Mommy are definitely working up something I’m playfully calling…The Macy Rumble.

And me?  Well I was on the same path too, but used some my super-secret-ninja-training to turn the whole scenario into something a little entertaining.  Of course, giggles ensued…

But, the goofy little secret that I used actually came from martial arts.

When I teach self-defense, particularly with a young lady, they often end up trying to push (or pull) against an actively resisting opponent.

They try and “muscle up” to get free.

What happens?  The stronger person typically wins that little kerfuffle of course.

So, what does the trained person do?

Well, they go with their energy.  If they’re pulling…you push.

And faster than a 5-yr old mood swing…off you go.

It’s the same reaction a prospect gives when you come in hard, cold call them on the phone, or ‘sell’ them (even if it works sometimes)…

The result is the same with your prospects as it is with the 5-yr-old…a train wreck.

But, when you recognize the pattern.

The change in direction breaks the hold, and progress (meaning sales) ensue.

And, yep…it works on little Macy too 🙂

So, if you want to learn my ways of doing this…

Of delivering a daily message that people enjoy, look forward to, and thus seek you out.

You want to get in on the July “The Daily Lead” issue (which is all about using edutainment), but the Sunday deadline is approaching.