Have I received my daily death threat? 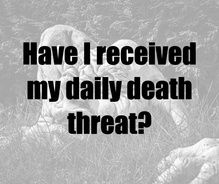 We gauge the success of a marketing message is by the amount of vitriol and hate we receive back.

One of my clients is running a really simple Facebook Ad.  It’s a short video where he’s talking about his service.

Yet, he’s receiving messages like, “I hope you die’.

The great Dan Kennedy talks about (and I’m paraphrasing) if you haven’t had complaints by 12:00, you’re not marketing hard enough.

Nike launched an add with Colin Kaepernick specifically because of the amount of controversary it would create.  Which caused an initial 4 BILLION dollar drop in their valuation, and then the attention spurred growth.

Peloton just ran an ad (whether intentional or not) that created a shift of attention to their brand.  Their valuation dropped by almost 1 Billion dollars, but I suspect that will go much further north very quickly.

In both these circumstances, that “controversary” created a massive amount of attention that grew the brand.

You have people that have never even heard of them, suddenly discussing them with passion.  This will attract many more clients to those brands.

We’re in the attention era, and if you don’t want to play that game then you’re limited in your options.

Thousands of “better” ideas, programs, and products are snuffed out like a match on a windy day simply because there aren’t enough buyers to sustain the business.

Does this mean you MUST use controversy?

No…but here’s the reality.  You don’t have a choice.

As soon as you do anything significant, step out from behind the curtain, or raise your profile…

You are an immediate target for the slobbering trolls that stalk social media.

So, either figure out how to use those trolls for profit, or wall up like you’re in a 13th century castle and hope they don’t tear it down.

But…the time to figure out how to use them, to practice, to build your skills is now.

Because it’s just a matter of time.

Brandon “own the trolls” Pugsley