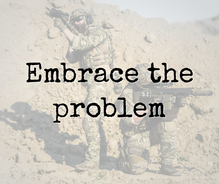 “Calm down.  Analyze and assess the situation.” – Col. Hal Moore, US Army.

I was a Military leader…

In simple terms it meant that I had a team who depended on me, and who I depended upon.

The military spends a lot of time training.

Spending a lot of thought, energy, and money to put you under pressure.

To stress you, so that when things happen you act and do not freeze.

There’s a term for that I also use in the martial arts, it’s called cognitive freezing.

The whole goal is that when things go bad…which they will.

And you act in the right way, so people don’t get hurt…or worse.

Right now, governments worldwide are taking action to protect people in the best way they can.

If you have a team, they’re looking to you…because the leader ‘on high’ doesn’t calm people down.

It’s the leader ‘in the fight’ that makes the difference.

The only way you can lead it to act.

The only way you act act is for you to understand the situation.

This is going to pass.

Forward with what you have control…

Understand your situation, and start preparing for the next phase.

If this impacts your revenue, then start building the system to generate it with move leverage.

If you can help others, then do so.

Leaders are built when the pressure is the highest.

It’s not a title given…

A quick note: I am moving forward with a few people who are going to take advantage of this ‘downtime’ to build out a leveraged Sales system.  If you want more info…just contact me and I’ll share the details.

Watching someone else celebrate…

You don’t close the President

Running across the yard, I wondered if he would make it…