Destroyed…because he was a success 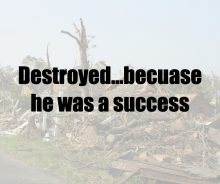 You’ve got a program coming up.  You’ve been delivering amazing results.  Your students are killing it.  Referrals are coming in.  You’re getting a boatload of new leads, and sales are through the roof.

You’re beginning to consider a waiting list and raising your prices because you’re busting at the seams and can’t squeeze anyone else in.

The place of dreams, right?

Stay with me because it ain’t all peaches-n-cream.

You go off and spend an enjoyable weekend with the family, and on Monday you get a letter, “Your lease has been terminated for cause, effective immediately”.

“But it’s just a story Brandon”

This actually happened.  It happened to a fine gent I know named Alex.

See, he had built his company up, and a big chunk of it was tied to Amazon.

Over a short period of time, a few days, a bunch of product reviews showed up that he thought were a little too similar, so he self-reported them to Amazon.

Well, they agreed with him…and they closed his store and banned him from the platform.

File this one away under…”no good deed”.

Now, if you’re not using Amazon, you don’t have to worry about this right?

Because the simple truth is that a bunch of negative reviews could destroy your business too.  Any of us could be kicked off Google, Facebook, your merchant provider, your email provider, and even your physical store at a moment’s notice.

If you’re just counting on people to stumble across your storefront (either virtual or physical) then you’re subject to whims of the mob.

And it can turn on you in an instant…even if you’re doing it “right”.

That’s the beauty of the system I teach.

It’s setup for you to actually build assets.

Assets that aren’t dependent upon a single platform, and can stand alone.

Assets that generate more sales because people want to actually buy from YOU!

It’s not a ‘miracle cure’, but it flat out works.

Anyway, if you want to get in on the early bird pricing: